Calling the Media—When is Ron Paul Going to Have to Answer?
By Alexander Marriott
Among the contenders for the Republican Party’s presidential nomination polling in or near the double digits only one sticks out as a true ugly duckling: Texas Congressman, and former OB/GYN, Ron Paul. Often pointed to as the “libertarian” candidate, Dr. Paul quixotically (heroically to his admirers) zeroes in on monetary policy, the existence of the Federal Reserve, and the “business cycle,” while his opponents debate the merits of their gimmicky tax/economy/jobs plans. But his most jarringly discordant notes come in foreign policy—particularly concerning the Islamic Republic of Iran.
Dr. Paul raised eyebrows during a GOP Presidential debate in August when he shrugged off the notion that Iran might get a nuclear weapon, comparing the theocratic regime to the Communist regimes of the old Soviet Union and the People’s Republic of China. He followed this bravura performance with an appearance on Fox News where he blandly acceded to the notion that Israel had nothing to fear from an Iranian nuke because: “The Iranians don’t have a tradition of sending troops and invading countries 6000 miles from their shore and occupying another country. [As] a matter of fact, they’re pretty respectful of their borders....” Further, he has advocated a "friendship" with a country that the State Department (see overview on pg. 150-151) and every terror expert in the world has indicted for numerous attacks on American interests and allies around the world--calling reports of Iranian nuclear ambitions "blown out of proportion."
The world has waited with baited breath after the revelation of the Iranian plot to assassinate the Saudi Ambassador to the United States in Washington, D.C., for Congressman Paul to revise his, some might say naive, position on the threat posed to Israel and the United States by a terrorist sponsoring Islamic theocracy. Instead, Paul told CNN’s Wolf Blitzer: “I think it’s mostly war propaganda. They’ve been itching to go to war against Iran for a long, long time. This is exactly what they did leading up to the war in Iraq, and the danger was not there.”
Why is this important? Isn’t this all simply the classic expression of libertarian non-intervention? Perhaps. But Ron Paul has a history, curious associations, and a veritable army of “interesting” supporters. Without coming right out in a poor imitation of Emile Zola, how exactly does a major presidential candidate with so much anti-Semitic baggage—past and present—glide unscathed from one media interview and debate to another? Paul is the only major candidate sporting a foreign policy which guarantees—if he is mistaken about Iran—the destruction of seven million Jews. A devastating exposé is potentially right there. Where is the media?
First, the history. In 2008, when Paul’s bid for the GOP nomination really garnered nation-wide support and attention, The New Republic and Reason Magazine covered a disturbing story about Congressman Paul’s writings from the 1980’s and early 1990s that contained a host of racist remarks and played into a number of insidious conspiracy theories. Congressman Paul’s excuses for these newsletters that were sent out under his name was that they had been ghost-written by some unknown aid—most likely the loathsome Lew Rockwell. The story did not progress much from there. Paul went on to rail against the Fed and Lew Rockwell continued to give him advice. (See also David Harsanyi's more recent piece in Reason Magazine.) Jeffrey Lord, at the American Spectator, has been among those at the forefront here, and here, in exposing the serpentine paths of Paul's anti-semitic connections. They are in-depth analyses of the beliefs of Dr. Paul and his associates and I cannot recommend them enough to people looking for more information about these issues.
Everyone has surely noticed Ron Paul’s passionate obsession with the Federal Reserve. The innocent interpretation of this is that Paul is a true libertarian and opposes central banking, fiat money, and government controlled interest rates. This is all probably true. But there is something else going on with Paul’s attack on the Fed that seems to go unnoticed. Delve into an internet message board of Paul supporters and you cannot fail to see references to “New World Order” and people bemoaning international financiers and bankers. Eventually, you will be directed to a book by G. Edward Griffin, The Creature from Jekyll Island (5th ed., 2010). 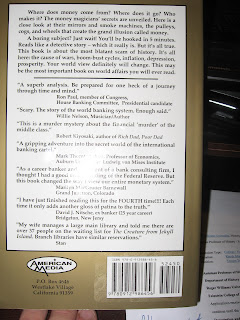 Those who used to be glued to Glenn Beck’s pseudo-history show on Fox News might remember that during an episode in March 2011, Beck gave this book and its author central prominence. Why does this matter? Aside from having no pretensions to being a historian, and aside from setting up a publisher to print his own book (thus avoiding pesky things like peer review), Mr. Griffin’s opus has chapters entitled “Building the New World Order,” “The Rothschild Formula,” and “The Creature Swallows Congress.” And, when you get to the back cover, what do you find just above the blurb of famed financial historian Willie Nelson (yes, THAT Willie Nelson)? Why, none other than Ron Paul and this outlandish praise: “A superb analysis deserving serious attention by all Americans. Be prepared for one heck of a journey through time and mind.” Other acknowledged experts in the field include a man from "New Jersy" and world-renowned banking expert, "Stan." On the right is a picture of the back cover of the most recent edition of the book.

Forget the goofy chapter titles and bizarre lingo (“the Mandrake mechanism,” for instance), what is the trouble with this book and author? Take the author first. Griffin is also “famous” for propagating a theory of cancer (he’s also not an M.D., in fact his credentials are a Bachelors in Speech and Communication along with the exalted rank of certified financial planner) as a metabolic disorder. Why is it not cured? You guessed it, a cabal-run conspiracy of medical professionals and drug companies does not want to see their livelihood--cancer--eradicated by a cheap cure. If you want to review Griffin's healthcare bookstore, you can also learn about the dangers and ineffectiveness of vaccinations. For a scientifically peer-reviewed overview of why Mr. Griffin, an untrained non-specialist, is wrong about this, see Dr. Victor Herbert's rebuttal in the May, 1979 American Journal of Clinical Nutrition.
When he’s not engaged in that quackery, he’s off searching for the resting place of Noah’s Ark. Yes, that Noah’s Ark. Oh yes, he also once upon a time wrote speeches for George Wallace’s vice-presidential nominee. Yes, that George Wallace. Don’t worry though, according to Griffin (while all of the material Griffin puts in this omnibus post is interesting, scroll down to "GRIFFIN "EXPOSED" AS SPEECHWRITER FOR GENERAL LEMAY!"), Wallace was merely “widely perceived as a Southern racist.” That’s right; it was everyone else’s fault for observing reality. To have a look at Griffin's conspiracy-pandering immediately after his failure to elect George Wallace to the Presidency, see this (particularly from minute eight onwards).
As for the book. No undergraduate history major would ever get away with writing one page of Griffin’s tome--primary sources are virtually non-existent and secondary sources are woefully outdated. This is tantamount to a criminal act against the practice of history given the nature of the narrative accusations contained in the book. He is constantly discussing things he has no personal knowledge of without any references. His bibliography looks impressive—but it’s missing seemingly very important books given his topic. He writes about the Rothschilds but ignores Niall Ferguson’s two volume biography of the family. (To see classical liberal historian Niall Ferguson discuss this and many other issues, watch this interview.) He does, however, rely on noted anti-Semitic conspiracy mongers like Eustace Mullins (see also how Paul's supporters lionize Mullins, here). It’s right there in the black ink of his own press.

The book contains all the modern, quite obviously racist canards, of the "paleoconservative" revisionism that is the raison d'etre of organizations like the Ludwig von Mises Institute and pseudo-scholars (and radically pro-Confederate racist revisionists) like Thomas J. DiLorenzo (see an interview with him here, and the Southern Poverty Law Center's description of modern Neo-Confederate intellectuals here). Slavery is not the cause of the Civil War, says Griffin, but the "legal plunder" of Northern industrialists against southern agrarians who desperately sought to invest their capital in more efficient resources than inefficient expensive slaves was the true cause. Despite the fact that he cannot even point to an old secondary source that contains such a reductio ad absurdum distortion of historical reality (and they certainly exist, see one of the few secondary sources he does use here), he also willfully ignores modern scholarship which is overwhelmingly based on the writings--public and private--of Southerners themselves to indict their vicious and callous and open pro-slavery motivations for rebellion. (For more on this, check out the Library of America series on Civil War writings from those who lived through the war.) Ron Paul has publicly endorsed these views as well, and I addressed them in very condemnatory language at the time.


Now, the Federal Reserve is almost assuredly engaged in foolish policies while performing an inherently illegitimate mission—many famous economists and political philosophers have held that position. The actual historian of the Fed, Carnegie Mellon economist Allan H. Meltzer, is often highly critical of the role the Fed plays in the economy. It is possible to be a critic of the Fed without it becoming a crazed, paranoid, obsession with Rothschild financier conspiracies hatched on island resorts.
And this brings us back to the troubling pattern of Dr. Paul’s history, friends, wild-eyed fans, and policies. As President, Paul would have to wait for Congress to audit/abolish the Federal Reserve, but he could immediately commit the country publicly to doing nothing about Iran. Can we count on a man who thinks theocratic, jihadist, holocaust denying Iran is no different than Cuba to defend American interests and allies? What if he did write his own newsletters, knows his advisors are anti-Semitic, nods and winks at his many Neo-Nazi supporters and knowingly endorses conspiracy-ridden screeds that pin all manner of crimes on a family of Jewish aristocrats and financiers? These are questions that need answering. But someone needs to ask him first.

(Mark Levin did a great segment on this very issue in August 2011. Do your own research!)
Posted by Alexander V. Marriott at 1:11 PM 7 comments: